In response to the harmful promotion of infant formula in the Global South, in the mid-1970s:

American church organizations turned to the New York City–based Interfaith Center on Corporate Responsibility (ICCR), an international coalition of religious investors from the Protestant, Roman Catholic, and Jewish faiths. It was the efforts of the ICCR, together with other religious organizations concerned with the connection between global justice and corporate responsibility, that would eventually lead to a global boycott of Nestlé and other corporate infant formula manufacturers.

That boycott, instituted in 1977, was dubbed the Infant Formula Action Coalition - INFACT. American Christian church groups who signed on to that boycott included American Friends Service Committee (Quakers), Lutherans, Roman Catholic archdioceses, Roman Catholic orders (like the Maryknoll Fathers and Brothers), Presbyterians, United Church of Christ, United Methodists, Disciples of Christ and ecumenical groups, including the National Council of Churches, Church Women United, and chapters of the anti-hunger non-profit Bread for the World.

The boycott and related protests led to the development of the WHO/UNICEF International Code of Marketing of Breast-Milk Substitutes.

While the INFACT campaign was a success, the irresponsible marketing of infant formula remains an area of great concern, as the "active and aggressive promotion of [breast milk substitutes] BMS by their manufacturers and distributors continues to be a substantial global barrier to breastfeeding."

That campaign also led to the formation of the non-profit campaigning group Corporate Accountability International, which organizes people around the world to apply direct and strategic pressure on transnational corporations and locks in changes by strengthening democratic institutions and empowering governing bodies like the United Nations to exercise their authority over transnational corporations.

Learn more about the INFACT campaign: Milking the Third World? Humanitarianism, Capitalism, and the Moral Economy of the Nestlé Boycott 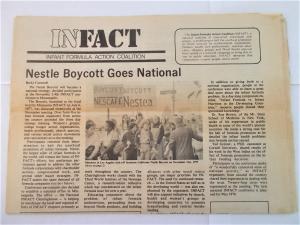 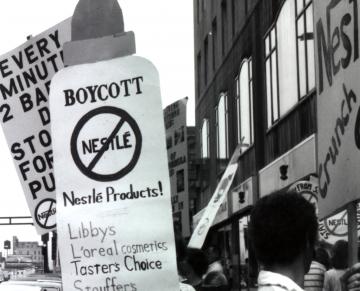